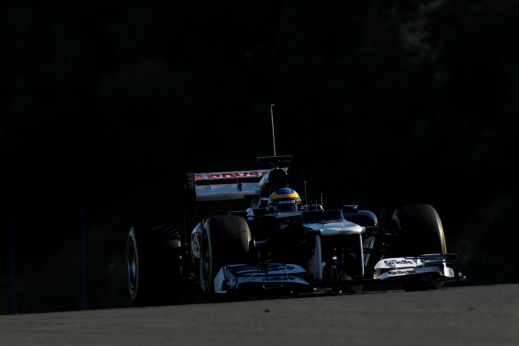 The Williams Renault FW35 will be launched at the second test in Barcelona on 19 February, the team announced this morning. Williams are thus far the only team to delay the launch of their car until after the first test in Jerez.

With only 12 days of pre-season testing available, it makes sense to get the new car on the track right from the start. Williams are not doing that, which is surprising, but it means there is a good reason to delay the introduction of the new car. It is possible that the team could be working on technical innovations that require more time in the factory. It is also plausible that the team has come up with a technical solution that will provide a significant advantage, and they do not want the other teams to see it early and have time to copy it onto their cars.

The latter strategy was adopted by Red Bull in 2011 when they introduced their revolutionary exhaust system very late in testing. The exhaust turned out to be the team’s great strength in that season, and they strolled to the Drivers’ and Constructors’ Championships.

Another possible explanation for the delay is the need to do comparative testing using a known chassis. The team has a great deal of data relating to the performance of last year’s FW34, which makes it a good test bed for new parts. The team has confirmed that it will be running a number of development parts on the car in Jerez, in anticipation of the launch of the FW35.

For the first test in Jerez, starting on 5 February, Williams will run the FW34 but using the 2013 livery. The FW35 will be presented at the Circuit de Catalunya in Barcelona early in the morning of 19 February before taking to the track the same day.