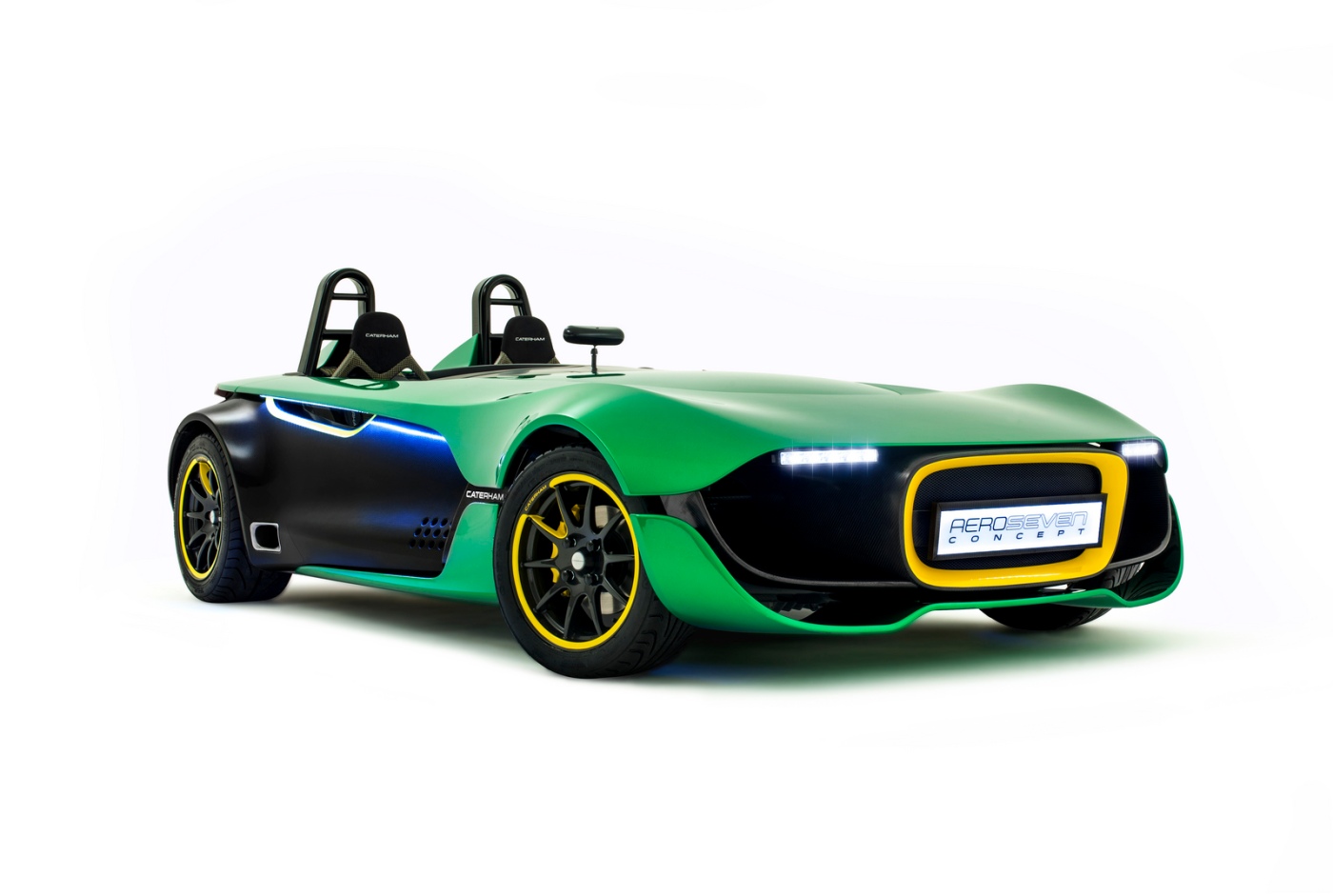 Caterham are perhaps best known, outside of Formula One, for their Caterham Seven car, which is based on the legendary Lotus Seven. In recent years, the manufacturer has been working hard to develop its road-going offerings, placing an emphasis on technology transfer from the Formula One team to the road. The latest result of this push forward is the Caterham AeroSeven concept.

The Seven is a very much a drivers’s car. With a reputation for superb handling, it’s been a classic for decades. The design is iconic, and quite distinctive. In principle it’s quite simple: a lightweight chassis with a front-mounted engine that drives the rear wheels. And those elements have remained for the AeroSeven.

Most obviously, the AeroSeven differs from the Seven in terms of aerodynamics and materials. The body is made of carbon-fibre which keeps the weight down and strength up. The rear of the AeroSeven is dominated by an F1-style diffuser that generates rear downforce. A front splitter does its bit for aerodynamics at the other end of the car. As for the rest of the bodywork, it is carefully sculpted to optimise the airflow over the surface of the car.

In terms of visual differences to the established Seven, the AeroSeven hides its front suspension almost completely, whereas the Seven bares it for all to see. The benefits of covering the suspension and hiding the front wheels a bit more thoroughly are entirely aerodynamic, as the motion of the front tyres creates a great deal of turbulence and drag. The result of these changes is a much wider and more aggressive looking front end that is quite visually appealing.

Caterham have clearly been at pains to emphasise the Formula One connection. The car is proudly painted in Caterham green as used on the F1 cars. The wheels feature striking yellow paint on the outside of the rim, which is reminiscent of wheels used by the F1 team in the last few seasons, although the current Caterham F1 car has not retained that visual feature.

The AeroSeven concept is powered by the same 237bhp (177kW) Ford Duratec engine developed by Caterham Technology & Innovation that features in the recently launched Caterham Seven 485. Power is transferred to the rear wheels via a six speed manual gearbox. In terms of performance, Caterham claims a 0-100km/h sprint time of less than 4 seconds.

For the first time on any of its cars, Caterham have equipped the AeroSeven concept car with traction control and launch control. And here is perhaps the only area where the concept could be criticised. Purists will not like the addition of traction control, which limits power to the rear wheels in the case of reduced traction and consequent wheelspin. Traction control is considered to take some control away from the driver, which could be frowned upon in some quarters.

But in terms of technological development, it only makes sense to add electronic aids to Caterham’s road and track cars. It’s a demonstration of the company’s technological prowess and will widen the potential audience for the car. There will also doubtless be settings that reduce the role of traction control on the car for those who wish to test their skills without it.

Other high-tech features on the AeroSeven include “an exclusive F1-style steering wheel with driver-focused functionality, and an intuitive fully active Graphical Display Unit (GDU),” according to Caterham’s press release.

The concept car has been launched at the Singapore Grand Prix that is taking place this weekend. The production AeroSeven is expected in the third quarter of 2014. Final specifications and options for the production version are still under consideration by Caterham and will be revealed closer to the production launch.

More images of the AeroSeven concept car are available here.