Ferrari are nowhere in 2020 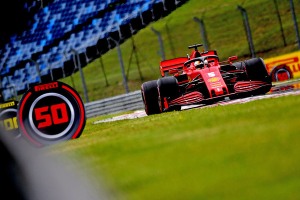 Sebastian Vettel in action during qualifying for the 2020 Hungarian Grand Prix (Image: Ferrari)

What on Earth has happened to Ferrari in 2020? After the first three races of the season, they just look slow. It’s tough to see how they could even begin to recover a serious challenge for victories never mind championships this year.

Don’t be deceived by Charles Leclerc’s 2nd place finish in the season opening Austrian Grand Prix. It was a very fortunate result – if not for the retirement of both Red Bulls, a late safety car and a time penalty for Lewis Hamilton, Leclerc would have been nowhere near the podium.

In today’s Hungarian Grand Prix, Ferrari simply had no pace. The best they could do was 6th for Sebastian Vettel, behind both Mercedes, both Red Bulls and the Racing Point of Lance Stroll. At no point did Ferrari look like they had the pace to even think about challenging for podium positions.

The Hungaroring is a tight, twisty, high downforce track. It may be that it showed all the weaknesses and none of the strengths of the Ferrari SF1000. But that doesn’t explain why Ferrari also struggled at the Red Bull Ring in Austria, a circuit that focuses more on engine power.

In fact, Ferrari’s seeming lack of power is a little bit mystifying. They started 2019 with an apparent power advantage over even Mercedes. In the 2020 pre-season, the news broke that Ferrari had reached a deal with the FIA over technical aspects of their power unit, which suggested they had found a clever solution that would give them a power advantage. But instead Ferrari, and all the Ferrari engine customer teams, seem to be struggling for power.

It’s too early in the season to write the car off entirely. There is still time for Ferrari to develop the car and the power unit and perhaps even challenge for race victories. But the Drivers’ and Constructors’ Championships may already be out of reach. Mercedes look unstoppable – they have won the first three races of the season with relative ease – and Lewis Hamilton in particular is in dominant form.

Charles Leclerc is already 45 points behind championship leader Hamilton, with Vettel a further 9 points adrift. Meanwhile, Ferrari are already 94 points behind Mercedes in the Constructors’ Championship. Those are massive margins to have to make up, particularly considering it is not clear how many races there will be in 2020. The season has been shortened due to the Covid-19 pandemic and currently only 10 races are scheduled. While it seems likely more races will be added to the calendar, it is virtually certain that there will be fewer than the 20 or 21 races that have become standard in a Formula 1 season.

Ferrari have started 2020 firmly on the wrong foot. What can they achieve from here? The next round, the British Grand Prix at Silverstone in 2 weeks time, will show if the recovery has started. If they continue to struggle, a very short F1 season is going to seem very long to the team from Maranello.