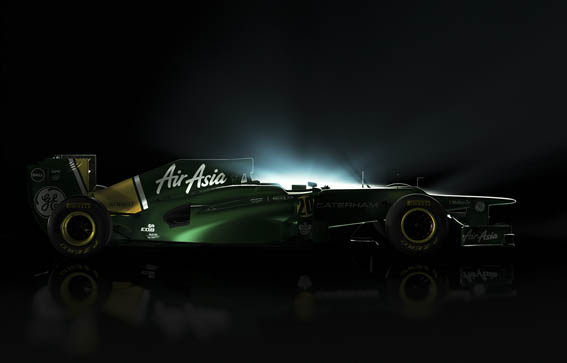 We’re into that exciting time of the pre-season when the new cars are revealed. Caterham’s 2012 car is called the CT01.

The livery is much the same as last year’s T128, which is good, because the green and yellow 2011 Lotus was one of the best looking cars on the grid. The most obvious feature of the new car is the stepped nose. The height of the nose has been restricted by new regulations, and so Caterham (along with some of the other teams) have opted to have a low nose that steps up to the chassis. It looks a little odd, but presumably it works. These guys know what they’re doing. It’s Formula 1, after all.

Other noticeable changes include the airbox. Last year’s car had a split airbox, which had first featured on the Mercedes MGP01 in 2010, and was adopted by Lotus and Force India in 2011. This year’s car has the more conventional single airbox above the driver’s head. The exhausts exit the engine cover higher up and further forward than last year’s car, due to the 2012 ban on exhaust blown diffusers.

The CT01 will be in action at the first pre-season test in Jerez, Spain from 7 to 10 February.