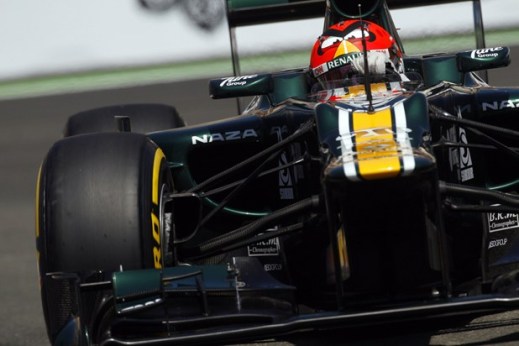 Heikki Kovalainen: “Silverstone is a great track to race at, both because it’s one of our two home races and because it’s a proper driver’s track. Even with the changes that have been made over the years it is still what F1 is all about – high speed corners that really push the performance of the car. The new section is probably the least exciting bit of the track from inside the cockpit but the classic corners from Copse and Maggots to Beckets is right up there with some of the best corners on the calendar.

“Honestly, I can’t wait to get back in the car and see what we can do at this year’s British Grand Prix. At the last race in Valencia we clearly made improvements, enough to help me put the car into Q2 on merit and we have more upgrades coming for Silverstone. For this race it’s important that we carry our qualifying speed and good reliability through into Sunday as issues like the KERS problem I had in Valencia impact all the hard work the team is doing at the factory and in the wind tunnel to get us where we want to be. If we can do that I think we can have another very good weekend and I’m really looking forward to giving our home fans something to cheer for.”

Vitaly Petrov: “The British Grand Prix is one of the best races of the calendar for several reasons. It’s a fantastic place to race at because of the exciting atmosphere and the special love the British fans have for motorsport. As the UK is home to a lot of the teams, including Caterham F1 Team, the whole place is always full of fans, whether it’s raining or the sun is burning everybody! They are some of the most knowledgeable, passionate fans in the world and they give the whole place a special atmosphere all weekend.

“As we’ll be bringing more new parts to the British Grand Prix I think it’s another race where we’ll be able to take a step forwards. I’m sure everyone else will be bringing upgrades so we need to make sure that we don’t just make gains, but we improve more than our nearest rivals. That’s a big challenge but after seeing the gap to Toro Rosso shrink in Valencia we have a clear target just ahead and that gave the whole team a real boost. Hopefully we’ll be able to make similar levels of progress at Silverstone – if we do I think the British Grand Prix could be very interesting. The team made great progress in Valencia and I really hope that we will continue in the same manner at the next race.”

Mark Smith, Technical Director: “We left Valencia after a very positive weekend for the whole team. One of the most pleasing aspects for me was seeing that the numbers we had predicted for the upgrades we brought there matched what we did on track, and that gives us a lot of confidence that future upgrade packages should continue the trend we are seeing of the gap to the teams ahead shrinking.

“For Silverstone we will be bringing a number of new parts, including new rear bodywork, a revised exhaust layout and a number of smaller updates in other bodywork areas around the car. I do not want to make any predictions at this point on what they could be worth, but if we repeat the step forward we made in Valencia we should have another positive weekend.”

Tony Fernandes, Team Principal, Caterham F1 Team: “The European Grand Prix was a very significant race for our team as it was the first time we took on and beat an established midfield team in a straight fight on merit in qualifying. Yes, Heikki’s benefited from the issues Mark Webber had on Saturday, but we are now quick enough to take advantage of that sort of opportunity and knock one of the established teams back into the positions we have been filling since we started in the sport just over two and a half years ago.

“Our performance on Sunday was also extremely positive, with all areas of the team performing at 100% to help us record our best positions of the season, despite both cars being forced to change nosecones after contact with the Toro Rossos. We said at the start of the season that our goals for this year are to score our first point and to join the midfield and I think it is fair to say that we are achingly close to being able to achieve those targets.

“Silverstone will give us another chance to show that we can make good on those objectives and the upgrades we are bringing will give both Heikki and Vitaly the chance to repeat our qualifying performance in Valencia, and, more importantly, to be able to fight for their track positions from the moment the lights go out on Sunday, right to the end of the race. To see our cars racing a team who were 1.6 seconds ahead of us in qualifying for the first race this year is obviously a very good feeling, for me and my fellow shareholders, our partners and sponsors, our fans and the whole team.”