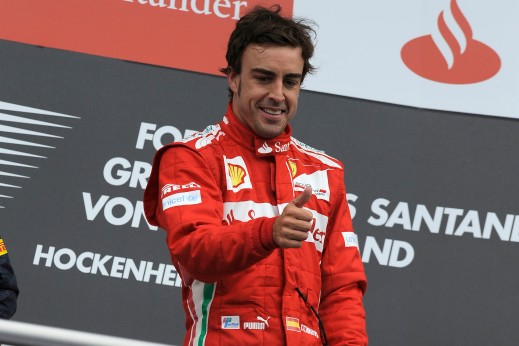 For the first few races of 2012, there was no dominant driver in Formula One. Lewis Hamilton was strong in qualifying, and Fernando Alonso was pushing beyond the limits of his car in the races, but neither could be said to be dominating the season.

Now, however, Alonso is the clear title favourite, 34 points clear of second-placed Mark Webber, with three wins to his name. And his strong position is mostly down to consistency. Alonso’s last six results are second (Spain), third (Monaco), fifth (Canada), first (Valencia), second (Great Britain) and first (Germany). The Spaniard is the only driver to have finished in the points at every race in 2012.

At the half-way point of the season (10 races out of 20 have been completed), it is mathematically possible for any one of the 24 drivers in the field to take the title. Realistically, however, there are only six drivers in with a chance of being 2012 World Champion: Alonso, Webber, Vettel, Raikkonen, Hamilton and Button. Although Nico Rosberg is ahead of Jenson Button in the championship, the Mercedes car does not seem to have the pace to be a title contender.

Button, seventh in the drivers’ table and 86 points behind Alonso, is the furthest behind of the realistic contenders. To translate 86 points into results, Button is three wins and a fourth place off the lead, which means he would need a very dramatic improvement in results for the second half of the season to mount a challenge. Nonetheless, it is possible, assuming Alonso slips up once or twice.

If Alonso fails to score at the next two races, he will quickly fall into the clutches of the Red Bulls behind him. He hasn’t quite run away with the championship yet. But if he continues to win races, it will not be long before Ferrari start planning the year-end party in Maranello.