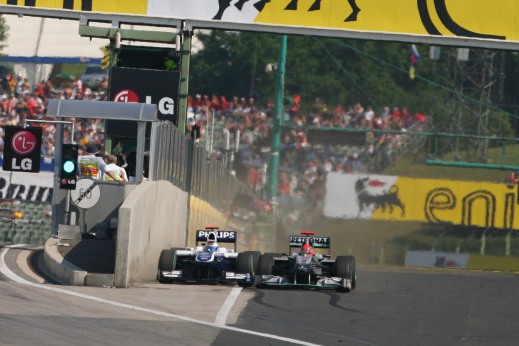 Budapest is the setting for the 11th round of the 2012 Formula One season. The teams have had no time to relax after the German Grand Prix last week, but can look forward to a mid-season break after this weekend.

The Hungaroring was the location for the first Formula One race behind the iron curtain in 1986, and has featured on the calendar every year since. The track is tight, narrow and twisty, with very little in the way of straights, and consequently has the second-lowest average speed on the current F1 calendar – after Monaco.

In recent years, Hungary has seen a surprising amount of drama. Felipe Massa’s near-fatal accident in 2009 happened when a spring from Rubens Barrichello’s Brawn hit Massa on the head on the run up to turn 4, one of the fastest points on the track. The start-finish straight saw Michael Schumacher push Barrichello very close to the pit-wall as the German attempted to defend 10th position in the 2010 race.

Fernando Alonso has won 30 Grands Prix, which puts him fifth on the list of most wins by a driver in Formula One history. If he wins in Budapest on Sunday, Alonso will take his 31st win on his 31st birthday to go level with fourth-placed Nigel Mansell on that same list.

Alonso’s very first Formula One victory came at the Hungarian Grand Prix of 2003. Of the current field, Jenson Button (2006) and Heikki Kovalainen (2008) also first stood on top of the podium in Hungary. Retired World Champion Damon Hill took his first victory for Williams in 1993 before winning again in 1995 and very nearly taking a surprise win for Arrows in 1997 before mechanical issues dropped him to second.

As in Germany, Pirelli are providing the teams with medium and soft compound rubber.

Who can bet against Alonso? The F2012 has, after some development, proven to be quick in all conditions, and Hungary should be no exception, particularly in the hands of the in-form Spaniard.

Red Bull should be in contention, as will McLaren. The surprise package of the weekend could be Mercedes, as the W03 has been quick on slower circuits that require good traction. Schumacher took pole in Monaco(before his grid-penalty dropped him to sixth) and Rosberg finished second in the race as Mercedes very nearly dominated proceedings in the principality. Perhaps they will be resurgent this weekend.

But Alonso is so dominant at this stage of the season that it seems very unlikely that he will be beaten to the chequered flag.

Friday and Saturday are expected to be dry, with a chance of thunderstorms on Sunday. If the race is wet, the teams could suffer from a lack of wet-weather set-up time, but hopefully the rain will hold off and the race will be dry, although a wet race could shake up the order.