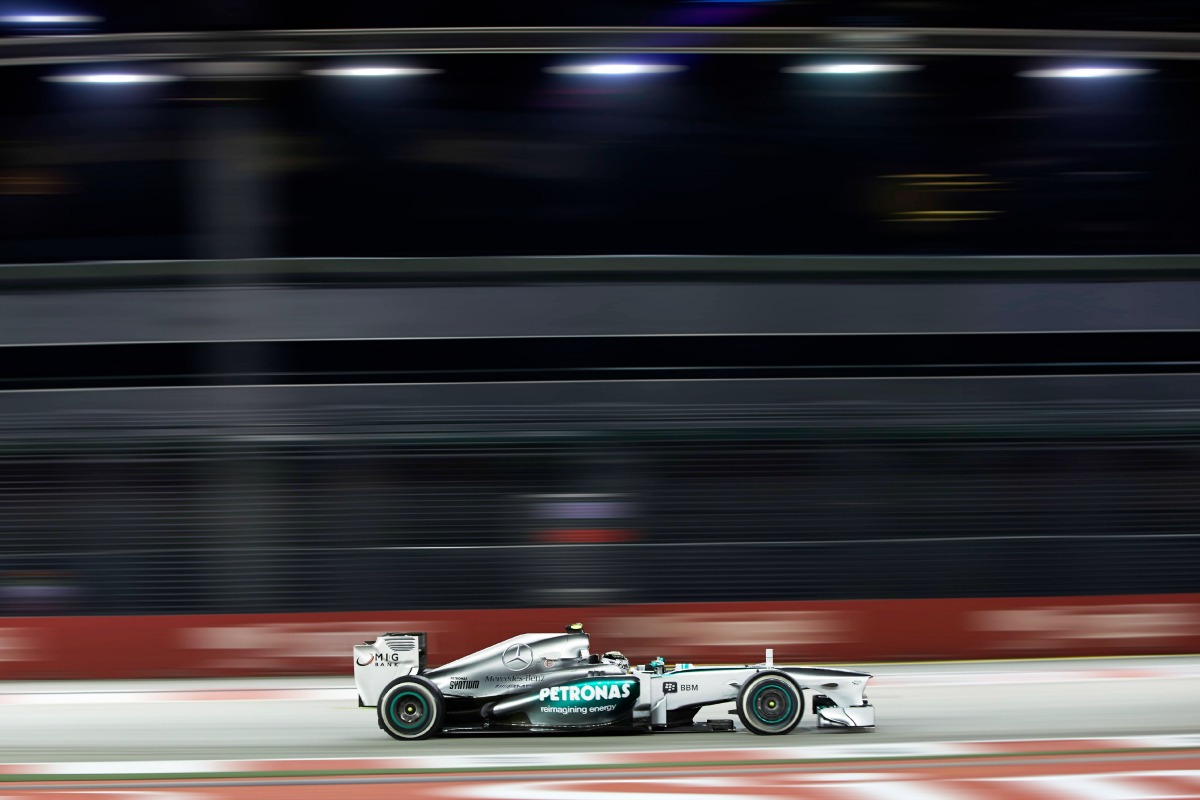 Lewis Hamilton has set the fastest time in first practice for the Singapore Grand Prix by a convincing margin, over a third of a second ahead of the leading Red Bull of Mark Webber. Sebastian Vettel set the third fastest time, almost half a second behind his team-mate Webber, with Nico Rosberg fourth for Mercedes.

There are some changes to the Marina Bay street circuit this year. The notorious “Singapore Sling”, the turn 10 triple-apex chicane has been replaced by a smooth, quicker left-hand corner, to the general approval of the drivers. In 2010, Lewis Hamilton described the corner as “the worst corner I’ve ever driven in Formula 1,” which suggests it will not be missed at all.

That’s the only change to the layout, but there appear to have been some changes to the track surface. It’s normal to have a patchy surface on a street circuit, as the track uses public roads that have to be maintained from time to time. But this year it looks like large sections of the road surface have been replaced, possibly with better tarmac. Some parts of the surface are significantly darker than others, and they appear to be rubbering in faster than the rest of the surface, as Lewis Hamilton commented on his team radio during the session.

The result of the changes to the track, together with the inevitable car development that takes place in Formula One, is significantly increased lap times around the circuit. Hamilton’s leading FP1 time was 3.5 seconds faster than last year’s fastest first practice time. Hamilton’s time is also just seven tenths of a second slower than his own pole position time from 2012, and that’s before any of the drivers have run the option tyres at all this weekend, nevermind on low fuel.

It’s always tough to predict Sunday results on the basis of Friday running, but the early indications are that Mercedes and Red Bull are quick around the streets of Singapore. Ferrari have probably not shown their pace yet, which is not unusual for the Italian team at this stage of the weekend. Ferrari have brought some new parts to Singapore, including a new diffuser, and likely used the FP1 session to test the new pieces rather than look for ultimate lap time.

Lotus are also looking reasonably strong, albeit over a second off the pace of Hamilton in FP1. But they could well have much more pace available in the Lotus E21 than we’ve seen in the first session. FP2 and FP3 will provide a much better idea of the running order.

Somehow, all 22 drivers avoided crashing out of the FP1 session. The streets of singapore are slippery early in the weekend and the walls are always close under braking and on the corner exits. A number of drivers brushed the walls (Giedo van der Garde managed it twice) but there seemed to be no resulting damage. Kimi Raikkonen and Sergio Perez each had to execute a half spin to rejoin the track after getting their braking wrong and taking to a run-off area, illustrating just how accurate the drivers need to be to stay on line.

At the back of the grid, the order was reversed from the last few races. Marussia’s two drivers were quicker than their Caterham counterparts. Marussia started the season well, and as a result currently sit 10th in the Constructors’ Championship. Caterham have developed faster than Marussia through the season, however, to the point that they have seemed for most of the year to have a significant edge on their rivals. But in Singapore, for whatever reason, the order has returned to what it was when the season started.